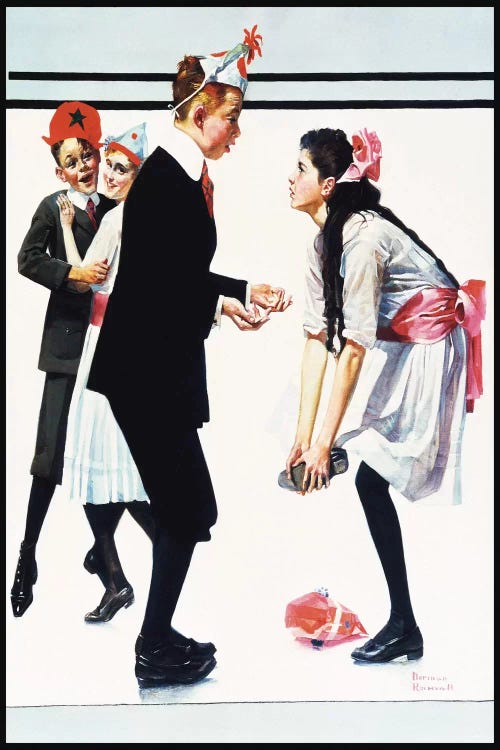 In September of 1957, I was starting seventh grade, 12 years old. My mother said that I was going to take dancing lessons. We went to the JC Penny’s store in the Hollywood district, to get me some presentable clothes. I got my first sport coat, nice slacks, white shirt, and necktie.

The Penny’s lady clerk took mom’s money, wrote a purchase ticket, and put them in a vacuum tube delivery system. They went to an office somewhere in the store, and we waited. After a few minutes, we heard a ‘whoosh’ and the carrier device came out. In it was mom’s change, and the store receipt of the purchase. Pretty neat.

Mom telephoned Bill White’s mother… and Bill was going to learn dancing, too. They settled on Norm Stoll’s School of Dance. By coincidence, the dance classes were on the same city block in Hollywood as the JC Penny’s, above Paulsen’s Drug Store.

Saturday’s, I’d walk down Sandy Boulevard to Paulsen’s, sit at the soda fountain, and pay my quarter to get a delicious, cold glass of carbonated Green River phosphate soda pop. Haven’t had one in over 60 years… still remember their flavor.

Then, on to the Multnomah County Library, to browse the fiction books. I loved to read, got my library card there in 1951- nearly 70 years ago, now -when it was an old, two-story brown brick building, next to the small U.S. Post Office. I have upgraded over the years, use the current card.

They tore the old library down in 1956, replacing it with a modern pagoda-like, modern structure that looked very weird, but was open and well-lighted inside. It’s still there, but the library moved on much later, to past Yaw’s Top Notch Restaurant & Drive-In, about the time that somebody tore Yaw’s Top Notch down, too.

Rest In Peace, Bob “The Cop” – standing on the curb in uniform, badge and gun, with his Tootsie Rolls, that he’d toss into kids’ cars, so slowly moving around and around… the Yaw’s Top Notch & Drive-In block…

Dance classes were on every Wednesday evening for 8 weeks, at 7 pm for 2 hours. The instructors were a nice couple, Mr. & Mrs. Norm Stoll.

Bill White’s dad drove us. Bill and I were both dressed up in our new clothes, and nervous. Mom told me to rinse my hands under cold water for a minute, to keep my hands from getting sweaty, and that worked pretty well. There was a side door by Paulsen’s, with stairs up to a big large ballroom with a hardwood dance floor. Bill and I went up, and we were in a group of about 40 girls and boys. The Stoll’s nicely herded us, boys on one side of the floor, girls on the other.

Norm Stoll was very tall and slender, dressed in dark suit. Helen Stoll, like all the girls, was in a nice dress. Norm usually did most of the talking, in a jocular manner that helped let us kids relax. Norm and Helen would demonstrate the Foxtrot, pause, and Norm would talk about the steps involved. We all were still on each side of the ballroom floor.

The various dance steps were shown in this way, and Norm would gesture girls and boys together and pair us off. Then we kids would awkwardly approach… actually hold… a person of the same age, different sex – in our arms… a music record would play, and we were learning to dance.

By the third Wednesday class, all the kids were in a routine, and the 2 hours went nicely along. Norm Stoll kept up his jocular humorous manner, Helen would smile graciously, and we were getting smoother in our dance.

Norm would announce that the next dance was going to be a contest for the best dancing couple (we were still being paired off at random). And the prize – would be popular 45 rpm records for the winners. Sometimes prizes would be announced as “…a box of chocolate-covered fish scales” or some silly other title, but prizes were always useful and nice.

Norm Stoll passed some years later – i learned that during World War II, he was a principal materials manager at Portland’s Swan island Shipyards, where many hundreds of Victory ships were built at amazing speed (one ship per day). Norm had a reputation for finding anything that was needed.

Helen Stoll lived years past Norm as a widow, still in the Hollywood District where she had acquired several buildings. She was concerned with keeping the Hollywood area “livable” for future generations. I never got to be a very good dancer, but Helen and Norm helped thousands of peoples’ lives, in many, many ways.

Another boy in the dance class was Paul Taylor, and he and I became friends, and did things during the week, like ride our bikes to Laurelhurst Park. Paul lived with his grandmother, and found interesting stuff to do like pouring gunpowder, or aluminum oxide, down a plastic ballpoint pen tube, propping it up to look like a space rocket, then stick a fuse in the bottom and light it up. It gave a big ‘Whoosh’. They never took off, just fell over and burned up, but it was still fun.

Two of the girls, Nancy and Patty at dance class, were in the same seventh grade class as Bill and I, at Saint Rose School. When dance classes were finished by November, the four of us would go to Nancy’s house on Wednesdays after school, play records, and dance together.

We had fun, a nice time, because we had achieved, the four of us, a new status in our lives, at our dance class. We were older kids… next school year, we’d be eighth graders.

The nuns at Saint Rose found out about that. Mother Gemma our teacher, scolded us, and took us to the school principal, Mother Michael, who glared and scolded us again, and called our parents.

Mother Michael was a short, feisty nun who was not to be trifled with, sort of a terror in our grade school – mostly terrorized wayward boys.

When Mother Michael called my mother, who knew about our after-school dancing, mom quietly told off Mother Michael – said ” . . . the nuns should have much better things to do, than poke into such things”. I was glad, but I don’t think we kept up the Wednesday sessions, after that. The touchy subject was dropped at school. Mere thinking, or wondering, about sex was still a mortal sin.

Paul Taylor was always curious, and asking adults questions. He found out that there was a downtown-Portland, grade-school citywide dance held each month on Saturday nights. At The Palais Royale, a huge old Portland ballroom on South West Burnside. Easy to get to, we could take the Sandy Boulevard trolley bus (Portland Traction Company) downtown, go to the sock hop, so we did.

There was an admission fee, but Paul got us in for free, because he volunteered us to be the beverage servers – to about 200 seventh grade school kids. That turned out to be pretty cool – we could dance all we wanted, and between dance numbers, we’d man the beverage bar. It was a dime for a large paper cup of Coke, 7Up, or Portland Punch.

I’m sure that sanitary and labor laws were ignored and broken. We served every month, collected lots of dimes, turned them in. I and some girl won a Fox Trot contest, we each got new, Buddy Holly 45 rpm records, “Party Doll” and “That’ll Be The Day”.

I remember in 1959, when Buddy Holly was killed in an airplane crash. Much later, in 1984, the movie, “The Buddy Holly Story” came out, and Gary Busey nearly won the Academy Award that year, Best Actor, for playing an excellent Holly character.

Buddy Holly, “The Father Of Rock ‘n Roll” and main inspiration for The Beatles, idolized Holly for years.

Buddy’s band was “Buddy Holly And The Crickets”. So John Lennon named their band, “The Silver Beatles” to mimic an insect. The first Beatle recording, “That’ll Be The Day”, was Holly’s hit song. Holly wrote the song after watching John Wayne say, “That’ll Be Th’ Day” seven times in a Western movie.

Buddy Holy was one of few American rock superstars to tour England. Holly performed rock’n roll concerts in 14 cities, including Liverpool, where the young Beatles could not afford a 1 pound ticket, to see live – their music hero.

They could only watch him on British TV. They were amazed that Buddy was white (not Southern Black). And that he was a wizard, performing on a Les Paul Stratocaster electric guitar.

A dance called, “The Stroll” was popular at the Palais Royale, and easy – kids would make two long parallel lines, and other kids would line up enter the line, and “stroll” as pairs – down between the lines, to slower dance tunes. Very simple, but it was always fun – each couple stood out, was featured… when they took their “stroll”.

Compared to the youthful times of today, our dance times of 1957 seem so very pure and innocent… and I think that… they really were that way.

This site uses Akismet to reduce spam. Learn how your comment data is processed.